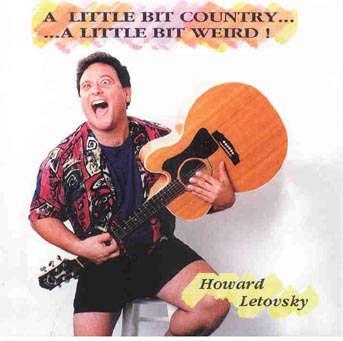 Notes on Howard's mastering session: The CD had already been mastered by a prominent mastering engineer that used to work for Phillips (the "inventor" of the compact disc as we know it) and 'SoundMirror' a great mastering facility in Boston. Howard came to me for One-offs for Radio promotion purposes before the cassette and CD production deadline. I commented to him that in his genre (country/comedy/pop crossover) the music was way too quiet (volume) as compared with major label releases at that time and that for radio airplay consideration even pros subconsciously hear louder as better. There was also a lot of hiss between hi-hat hits in the intro to this song and we cleaned that up also. He had the CD release re-mastered at puresound before it went to print and the rest is history. Keep in mind that he released the CD on his own without the gobs of promotional monies that come from a major label release. Without that re-mastering the CD might not have won the success it truly deserved. A good mastering engineer not only needs great ears but a solid feel for the industry standards at the time.

And yes kids, just because you bought or cracked 'mastering software' from the web you don't not have the years of experience it takes to make real world decisions on the sonic quality of your project that you have loved and slaved over. An engineer with no plug-ins will make a better recording than someone else with gobs of gear.

If I may quote: "It's not the gear, it's the engineer. Machines don't make music, people do."-Fletcher

Does it compare with other major label releases? Is there tape noise? Are the peak levels of each song monitored and matched? Did the kick drum dissappear or did it just sound dull when you played the studio tape at home? Is the lead vocal lost in the mix?

Whether it's a lost snare drum or even vocal there is hope.
With powerful and WARM digital EQ's and Compression
Or with classic analog processing
Your songs will sound better !

Why do you think every major label release is mastered?